Ego States and neural networks are synonymous terms used to describe how systems of beliefs, feelings, instructions, coping skills, and behaviors become automatic “programs” that are stored in the implicit memory of the subconscious mind — activated by the brain on cue. Study these two Ego-State Map Presentations thoroughly to see how you can analyze your own relationship patterns and make changes as you see fit. (It helps if BOTH people learn this, but it is not required for changes to be made.) 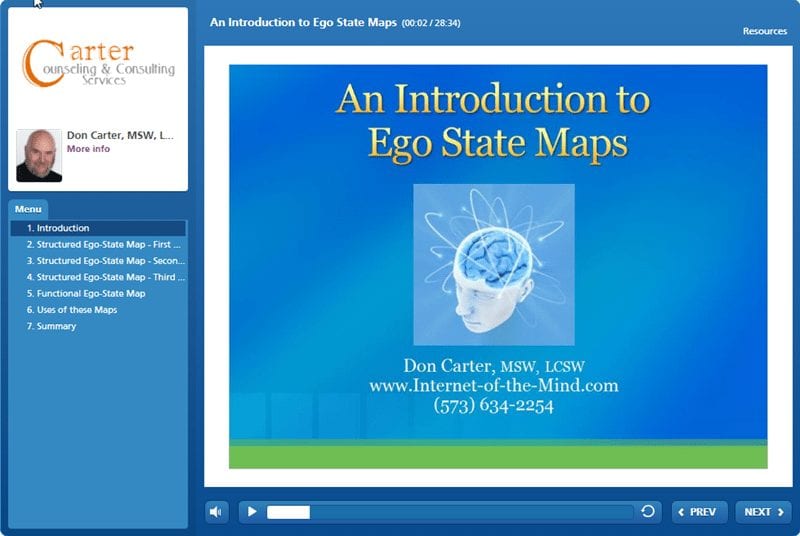 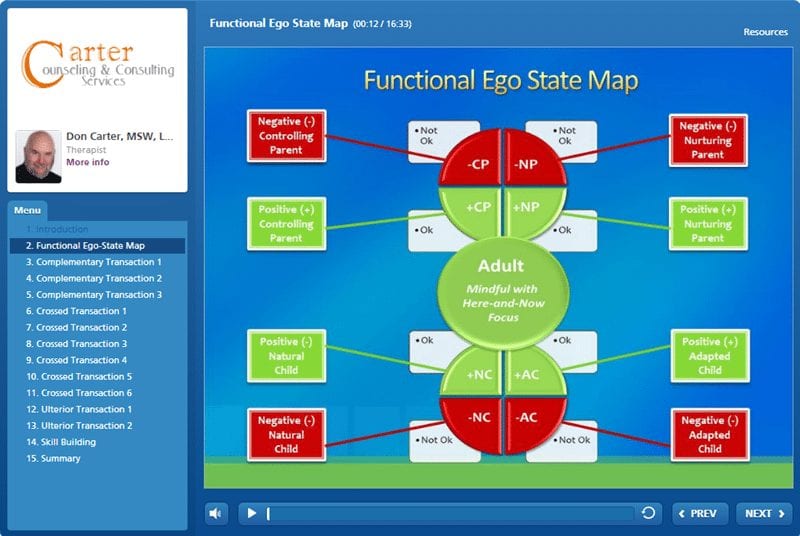 There are various therapies for effectively working directly with these neural networks using the language of “right brain” or subconscious mind — i.e., metaphor, symbolism, and analogy. Methods I’ve found useful include the following:

These therapies are complementary and in some cases must be used in concert with one another. Ego State therapy, for instance, frequently calls for the use of hypnosis, in many cases, in order to gain access to the network of focus.

Many people come in for counseling because they are in pain. They have tried everything they could think of to identify and change whatever it is that that causes the pain — But to no avail. When a person does everything they can think of yet the problem remains it indicates that the problem is at the subconscious level — you cannot solve a subconscious problem with a conscious effort.

Transactional Analysis (TA) was developed by Eric Berne, MD in the 1960’s. Originally, TA focused on three ego-states and studied of how people interact with each other (Interpersonally) from within these states. Later on, the second branch of TA was developed called Structural Analysis. Structural Analysis studies the interaction between one’s own ego states (Intra-personally) and how that plays out in interactions with others (Inter-personally) — It’s a method of analyzing a person’s thoughts, feelings, and behavior based on ego states.

The Parent neural network contains the attitudes, beliefs, and behaviors “taken in” from external sources – primarily parents. Outwardly, the Parent is often expressed towards others in prejudicial, critical, or nurturing behavior — from Second Position.

Inwardly, it’s experienced as old parental messages which continue to influence the inner Child…some good messages and some limiting to the person.

The Adult network is not related to a person’s age… It’s oriented in the present and can be comparable to a computer in that it’s in charge of executive functioning — i.e., decision-making, problem-solving, etc.

The Adult is organized, adaptable, intelligent, and functions by testing reality, estimating probabilities, and computing dispassionately – from Third Position.

The Child ego state contains all the impulses that come naturally to a child… the Child is creative, adventuresome, spontaneous, curious, affectionate and so on. The Child loves to giggle, laugh, have fun and enjoy the simple things in life. It can also be a “brat” or “whine” when it doesn’t get it’s way. The Child lives in First Position and is the network that contains our feelings, wants, and needs.

When you see a seventy-year-old man sitting on a park bench enjoying an ice cream cone he’s in his Child. When two adults are dancing “like no one is watching” they are each in their Child.

In TA theory, only one ego-state (ES) can be actively in control of the body at a given time… When a person is “in their Child” then that ES is considered “activated”… In Ego-State therapy, the term is “in the Executive”. For example, if you have ever gotten angry, blew up and later felt that your behavior or reaction was “childish” then you have a good idea of what is meant by only one ES can have executive control at a time.

The Adult and the Parent ego-states can be “present” in an observing role during the blow-up… but only the activated ES can have executive control of the body. When you calmed down and told yourself “that was a childish thing to do”, it was coming from your Parent ES. In TA the term “childish” is never used… the term “child-like” is used instead.

“Child-like” is a respectful way to acknowledge and “own” the Child ES… “Childish” is a put-down and would come from a “Critical Parent” ES which we will explore later.

When we are in a certain neural network it makes sense that we can only operate from within the boundaries of that network. When another network is “activated” or “takes the executive” it means our awareness has shifted or relocated to that network. If you pay attention you will notice that we shift ego states many times a day… each ES has their own focus, mood, and physiology.

We can interact with each other from any ES… Anytime one person recognizes another with a smile, a nod, a frown, a verbal greeting, etc., this recognition, in TA language, is called a “stroke”.

Two or more strokes make a transaction. All transactions can be classified as complementary, crossed, or ulterior.

For example, if a wife who is grieving her lost friend is comforted by a sympathetic husband, her momentary dependency is answered appropriately… (See diagram)

When two people stand glaring at each other, turn their backs on each other, are unwilling to continue transacting, or are puzzled by what has just occurred between them, it’s likely that they have just experienced a crossed transaction.

A crossed transaction occurs when an unexpected response is made to the stimulus. An inappropriate ego state is activated, and the lines of communication between people are crossed. At this point people tend to withdraw… turn away from each other… or switch the conversation in another direction.

If a husband responds from his Child unsympathetically to his grieving wife…”Well, how do you think I feel?”… he is likely to cause her to turn away from him. Crossed transactions are a frequent source of pain between people – parents and children, husband and wife, boss and employee, teacher and student, and so forth.

The person who initiates the transaction, expecting a certain response, doesn’t get it – The individual is “crossed up” and often feels discounted and misunderstood.

Ulterior transactions are the most complex…They differ from complementary and crossed transactions in that they always involve two or more ego states.

Only one ES controls the body… but another Ego State is operating in the background and can sometimes be seen in what NLP calls a state of Simultaneous Incongruence… One ES may control the verbal and the other may be seen or heard in the non-verbals.

When an ulterior message is sent, it’s disguised under a socially acceptable transaction… It’s as if the activated ES poses as another ES to disguise the transaction in some way. If a car salesman says with a leer to his customer, “This is our finest sports car…but maybe too racy for you,” he is sending a message that can be heard by either the customer?s adult or child ego state.