Stages of Change and Recovery Wheel

Identifying the stages of change and learning how to move through them reminds us that change is the only thing we can really count on to stay the same? Even the rate of it is steady – always speeding up! We humans don’t really like a lot of adjustments or disruptions in our lives – some of us don’t like any at all. Others of us like some variation but not too much and not too fast. This is because of that concept we talked about in the section on Chronic Stress – homeostasis or internal steady-state.


Mini-Course: The Stages of Change

(3 of 44 videos Lessons in the Thawing Toxic Relationships Course)

Stages of Change and Homeostasis

Significant changes require a period of adjustment lasting perhaps several weeks or months before our neural networks catch up… This adjustment period results in a neo-homeostasis or new steady-state. Some examples may help – Taking a new job requires a bit of an adjustment period:

Wow… I’m getting stressed just thinking about the new neural networks that must be updated! Some changes are kinda fun, but they still require a period of time for the adjustment. For example, how about when you got that new car you were saving up for?

At that point the “adjustment” has been made – the new neural pathways have been laid down and a new steady-state achieved. Sounds easy, doesn’t it?

Sometimes it’s easy to make an adjustment – depending on how big of an adjustment and how important the change is. Deeply entrenched networks having to do with addictions, chronic depression, codependency, anxiety issues, panic attacks, and so forth are more difficult adjustments to make.

Due to the need to maintain our internal steady-state, we will encounter resistance to changes that are significant… it’s as if these networks protect themselves… or are protected by another network or “Part” of us… See the page on Ego-State Therapy or the one on Parts Integration Therapy for more details on this. This resistance appears to be worked out in specific stages…Below is my descriptions of each of the stages in the Stages of Change Model first developed by Prochaska and D’Clementi: 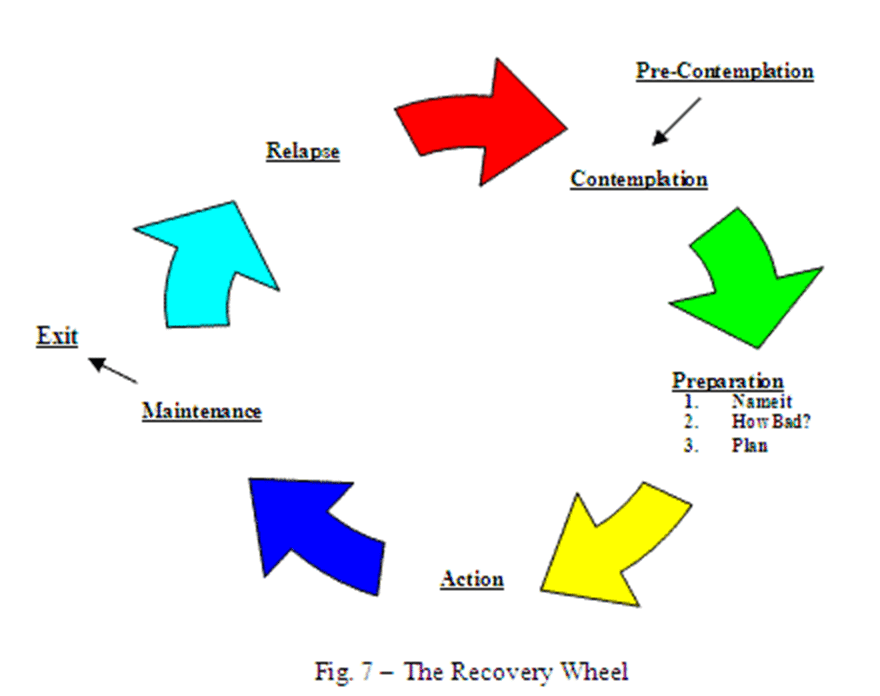 The Stages of Change – Pre-Contemplation:

This stage is when there is no reason to question whether or not a change needs to be considered… Simply put, the thought “Do I need to look at my(depression, anxiety, drinking, etc)?” never comes up because the person has no intention of looking at it yet… This is before contemplation… As soon as the person becomes willing to consider changing they enter into the Contemplation Stage.

The Stages of Change – Contemplation:

If – as they often do – a loved one takes on the role of prosecutor it leaves the role of the defense attorney to the person who has the problem… This is often referred to as Enabling Behavior because it allows the problem to continue by externalizing the internal battle.

Enabling allows the problem person to avoid the pain of listening to his/her own prosecutor (conscience) by staying in the defense attorney role — rather than working through it to a point where the internal “judge” can make an accurate decision.

The Stages of Change – Preparation:

Sooner or later the internal judge must decide three things:

The Stages of Change – Action Plan:

When the person activates their plan they have entered the Action Stage. Early plans may sound like this:

The Stages of Change – Maintenance:

If the plan is adequate the person enters the Maintenance Stage and EXIT the wheel. If their plan is working, They must “keep doing what they’re doing in order to keep getting what they’re getting”. When one stops doing what works (the new network of thinking, feelings, and behaviors) they usually end up in the relapse stage (by going back to the old network).

The Stages of Change – Relapse or Recycle:

If the plan is inadequate the person relapses or recycles back to the Contemplation Stage to start the process all over again… It’s not unusual for a person to recycle through this change process many times before coming up with a plan that is adequate to bring about change in a lasting way.