A survival skill known as dissociation is a process in which children caught in a traumatic situation or environment learn things like how to “zone out” or “go somewhere else” in their mind, while the subconscious mind takes care of the business at hand.” Adults with an abusive background can experience unpredictable and involuntary episodes of dissociation on a regular basis due to the unfinished business of the past, i.e. untreated emotional trauma. This is a hallmark symptom of all varieties of PTSD. (For an in-depth look at the effects of such trauma click on the image below.) 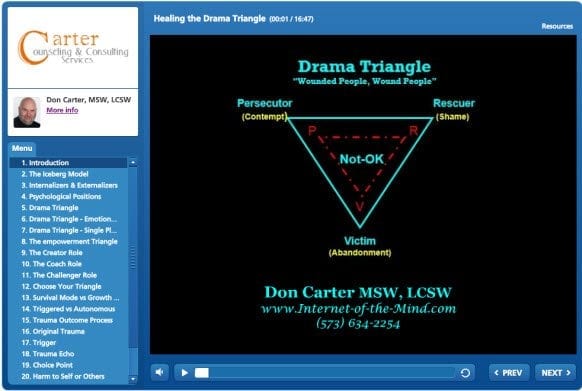 When traumatic experiences occur early in life, while a child is negotiating the delicate and complicated tasks associated with normal developmental stages, there is a deviation from “normal” development. The child has to learn sophisticated methods of self-protection called survival skills.

And the child has no one to rely on to accomplish this learning except their own instinct for survival — i.e., pattern matching and the fight-flight-or-freeze response. These survival skills are learned behaviors that are encoded on the neural circuitry of our brain. They help the child to adapt to the dysfunctional patterns, cycles, and rules of the family.

One reason for this is because information related to growth is in a constant state of flux as new learning is occurring on a daily basis. This growth-oriented information is stored in the higher cortical regions of the brain, i.e., the “thinking brain”. As such it is much easier to access and change than information coded on the networks for survival — and for good reason…

Survival skills need to be initiated at a moment’s notice, perhaps during a crisis when there is little or no time to think and therefore must be protected, kept intact and in a state of readiness. So survival-oriented data is stored at the deeper emotional and visceral regions where it is immediately accessible to all the structures of the brain responsible for the fight-flight-or-freeze response…

It is very important to recognize a couple of things at this point. First, the survival skills that are burned into the most highly secure area of the brain as a result of intense, traumatic experiences are created by a child, with the mind of a child, the experience of a child, the understanding of a child, the physiology of a child, and with the only inner resources available to the child at that time.

Secondly, due to the repetition of these experiences and the intensity of hyper-arousal from an ongoing lack of safety, these imprinted survival circuits are reinforced and strengthened with each new similar occurrence – and these emotion-laden states are frozen in time, sometimes at several points in time!

In other words, due to pattern matching and the way the brain encodes information related to self-preservation, all of the elements of these survival strategies remain the same as the day they were imprinted including all of the beliefs, the physiology, the behavioral responses, emotions, and sensory data (hear, see, feel, smell, taste) taken in by the child during the imprint experience resulting in the creation of what I refer to as frozen feeling-states (aka, Survival Mode):

The survival networks of the brain are more difficult to change or update for another reason — i.e., the prime directive of the brain is self-preservation. Everything else is deemed less important than survival — including self-actualization (growth). Once a survival skill is learned it becomes tagged as valuable data that must be protected.

So the survival skills that are learned by a child growing up in a dysfunctional family are encoded in an especially secure area of the brain — immediately accessible to all of the structures responsible for the fight-flight-or-freeze response.

A momentary freeze may occur because the brain needs a second to evaluate the incoming data in order to choose which feeling-state to create if any at all. The chosen feeling-state is then followed by an automatic behavioral response – i.e., fight or flight.

But there is another state that can occur in extremely overwhelming situations — a “shutdown”, a “circuit-breaker effect”, “Numbing out” aka, dissociation. This involves the most primitive part of the vagal nerve bundle sometimes referred to as the dorsal vagal response.

Now, remember that children in a moderate-to-severely dysfunctional family are like prisoners of war (POW’s) — the younger they are the less able they are to outwardly fight back or flee. So when they encounter a new threat they can get stuck in the freeze response for a lot longer than usual. The clinical term for this is dissociation — a process in which the child “zones out” or “goes somewhere else” in their mind, while the mind takes care of the business at hand.

During this time, the brain continues to process the incoming data, continues to sound the alarms (increasing in intensity), and continues to search for an appropriate behavioral response. The pre-frontal cortex (thinking brain) comes to the rescue by devising a plan for how to deal with these experiences – creating a survival strategy. If the whole ordeal is intense enough, one-trial learning occurs. Sometimes the dissociation or skill of “going somewhere else” itself becomes a survival mechanism creating a dissociative “disorder” – which was, at the time it was created, actually a solution.

The dissociative episode itself might simply be drifting off into a daydream or “zoning-out” (yes, something we all do from time to time). In more severe cases it may mean, having a feeling of not being real, to an out-of-body experience, to switching into another part-of-self, ego-state, or “alter” and not knowing where you’ve been for several days (amnesia).

For one who has a dissociative disorder anything could trigger an episode; reading this website, watching a movie, seeing an old friend, hearing an old song, literally anything that might bring up an association to the dissociated material (that’s right, pattern-matching) can trigger an episode — what used to be a solution has now become a problem.

Involuntarily being triggered into dissociative episodes can wreak havoc in a person’s life and relationships. If you think you may have a dissociative disorder please seek a professional evaluation. If you don’t know where to go for help ask your doctor for a referral or call your local hospital.