Codependency and addictions are the natural outcomes of the childhood abandonment issues covered in the Iceberg, Part I. Symptoms include developing and external focus, use of survival skills vs coping skills, wearing a mask or cover-up, negative core beliefs about self, others, or life in general, and psychological drivers that cause us to focus on pleasing others, making everything a struggle, being strong, being perfect, and/or doing everything in a hurry.

For those who need to do things in a hurry, we recommend that you start with the presentations below… 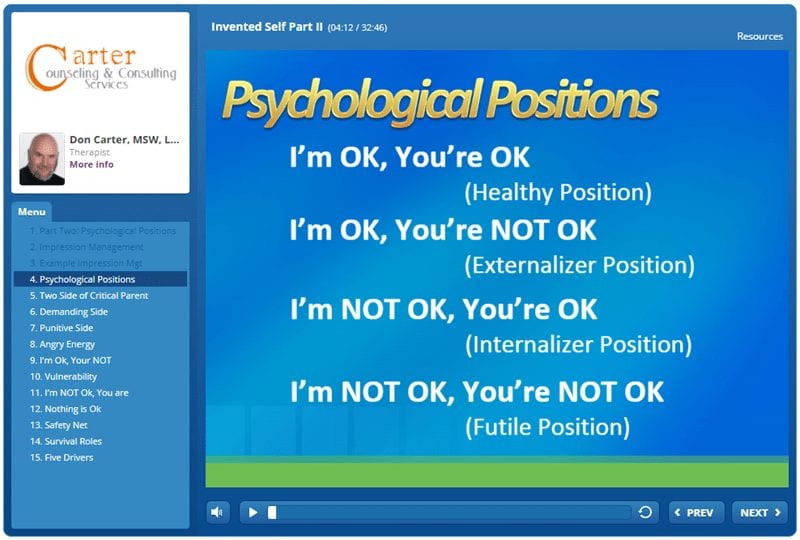 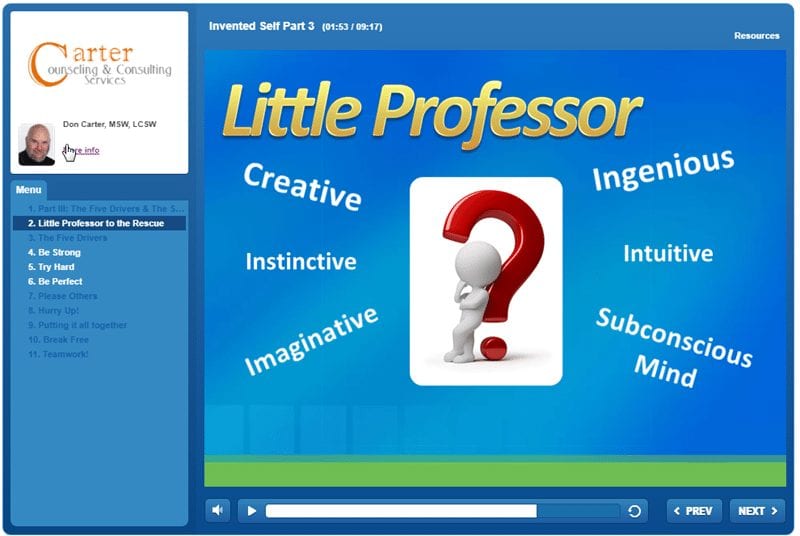 In order for children to survive the pain of their emotional wounds, they must learn to live outside themselves. In other words, they must develop the hallmark of codependency — an External Focus.

In other words, the child must find ways to direct their attention toward their outer world in order to avoid the pain of their inner world. Everything outside of their own skin is the “outer world”… while our thoughts and feelings exist only in our “inner world”. (See diagram below) 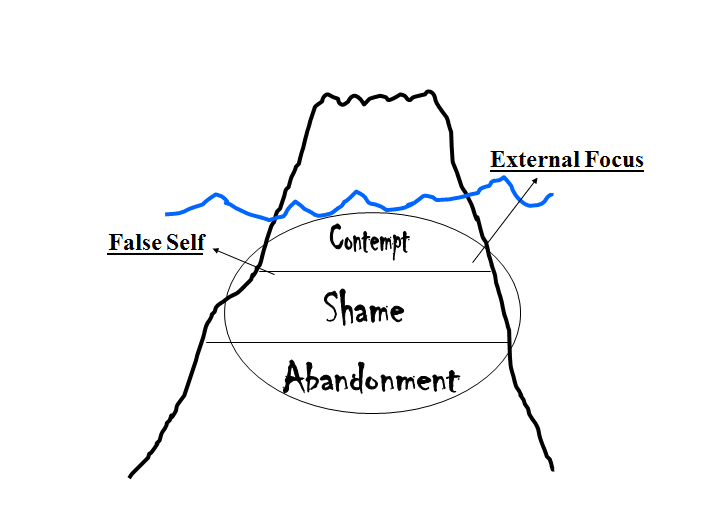 Children develop this external focus through a number of distractions – imaginary friends, relationships with pets or stuffed animals, watching cartoons, and staying busy with play.Later on, it may be with video games, skateboarding, sports, computer games, getting into trouble – anything that keeps them distracted and “out of themselves”.

Kids who have a lot of pain have difficulty with inactivity and quiet time. One will often hear them proclaim… “I’m bored! I can’t stand boredom!” In my work with teenagers, I encountered the “I can’t stand boredom” syndrome many times before I realized it really is true for some. Many kids have trouble tolerating boredom not because of boredom itself – but because of what boredom represents.

To emotionally wounded kids — kids who are growing up in less-than-nurturing families, boredom is a red flag that signals they are losing their external focus. As their attention begins to drift inward… anxiety starts to build because their repressed emotional pain begins to surface. The pain rarely gets very far, however, because the child or teenager is compelled to take action (aka, “act-out”) to help them regain their external focus.

Billy, a teenager, is referred to counseling for habitually skipping school… Through the counseling process, it’s discovered that Billy’s father drinks every night and things at home are fairly chaotic most of the time. In order to keep an external focus so he can avoid his emotional pain… Billy has to remain actively involved and interested in the class.

However… every day right after lunch Billy has a math class. He is not interested in math at all because he is not very good at it (competency issue)… so it is only a short time before “boredom” sets in… Billy tries to regain his external focus by staring out the window in a daydream. That works for about three minutes… Soon he finds himself passing notes, shooting spitballs, or talking to his neighbor…

Before long the teacher is lecturing Billy… again… for disrupting the classroom. Billy then gets into an argument with his teacher who is “always picking on me” (externalization of contempt). The teacher then sends Billy out into the hall where the next external focus, the principal, is approaching.

Billy has the option of going through this routine each day or avoiding it altogether by skipping class. The easiest option is to skip class and find some way to retain his external focus… Sometimes he would get a friend to sneak off with him to go hang out downtown… sometimes he would simply go home to watch videos… play on the Internet… or engage in some other distraction…

Again, acting-out is only one method that helps a child distract from their emotional pain… Other methods include creating imaginary friends, acting-out nurturing relationships with stuffed animals, dolls, or pets, video games, comic books, cartoons, hyperactivity, and various other ways to stay “outside” of themselves.

This need to stay distracted or externally focused is the foundation for codependency… in fact, codependency is sometimes described as “addiction to the outside”. As John Bradshaw puts it – “With codependency, everything is an outer reach for inner happiness”. The cost of needing an external focus is a lack of self-awareness. The codependent person never got a chance to learn how to identify their needs – much less get them met.

When you ask a full-grown codependent how they feel they will very often begin talking about their kids or their partner or change the subject – it’s very difficult for a codependent to focus on themselves.

In fact, subconsciously, adult codependents construct their lives in such a way that they never have time for themselves. They often get involved with a problem person in order to maintain that external focus — Enabling behaviors are the stock and trade of a Codependent.

They “find” themselves entrenched in work-a-holism… or married to a dysfunctional partner… or raising problem children… or burning out on an overloaded schedule of things that MUST get done every day… or all of the above!

embedded within the networks of abandonment, shame and contempt are networks of the memories, beliefs, thoughts, and feelings that created them. As the codependency neural network grows and becomes more sophisticated the codependent takes on more and more.

In doing so they are perpetuating their own abandonment… causing the emotional woundedness of the False-Self to worsen – which causes the codependent to have to take on even more in order to avoid their ever-growing pain.

Codependency and the Invented Self

Another thing a child must do in order to avoid their inner world and stay in their outer world is to subconsciously build a wall between their awareness and their unawareness. Codependent children learn to “cover up” their False-Self by projecting an image others might find acceptable. This is often referred to as “wearing a mask”.

I think of it as inventing a self to cover up the False-Self because… “If people really knew me they wouldn’t like me (shame) – and they would reject me (fear of more abandonment)“. (See diagram below) 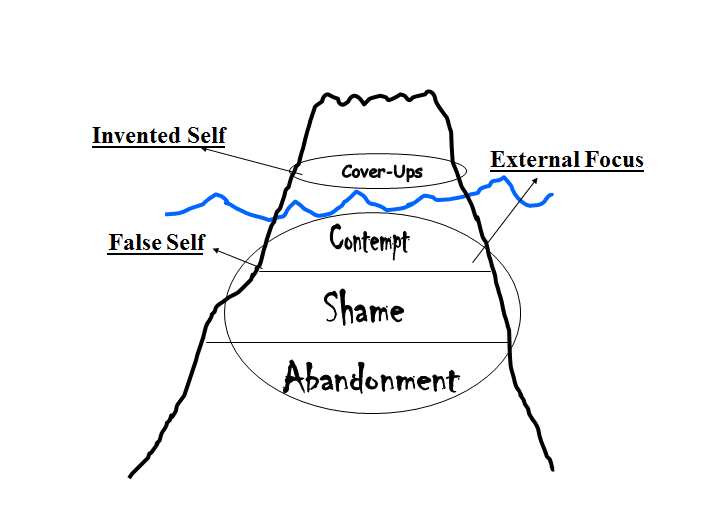 Codependent children unwittingly invent and project these “masks”… aka survival roles… through the use of subconscious perception and defense mechanisms in order to get some of their needs met.

They get enmeshed with each other and the problem behavior as well as leaving less and less time to attend to anything else including the children.

When the first child comes along he/she finds out fairly quickly that in order to get any time, attention, affection, and direction in this family you have to do something outstanding to get noticed.

So the first child usually becomes the Family Hero. — There are two kinds of family heroes. The first is the flashy one who gets all A’s… is captain of the football team… valedictorian… class president… head cheerleader… or even a combination of the above. The second type is the behind-the-scenes hero – AKA the Responsible One or the Parentified Child. This is the child who comes home from school early every day to do the laundry… get the mail… prepare dinner for the other kids… do the dishes…and essentially becomes a parent at ten or twelve years old…this child has most of the symptoms of codependency before she is even a teenager.

The second child usually becomes the Rebel or Scapegoat. — This child cannot usually compete with the first child for positive attention because the Hero has a head start… So the Rebel must settle for the next best thing… i.e. negative attention. Subconsciously, they figure out that negative attention is better than no attention. The Rebel gets time, attention, affection and direction from teachers, principals, juvenile officers, counselors and anyone else who would try to help them. While they may not get any positive attention – they do end up getting the most attention… The parents must stop what they are doing to deal with this kid’s misbehavior because the school or juvenile office keeps calling.

The third child cannot compete for the positive attention or the negative attention… so they don’t get any direct attention – this is the Lost Child. In order to survive this child relies on fantasy to get their needs partially met.  An example of a Lost Child is the seven-year-old girl who is always somewhere in the background playing with a doll that she’s had forever. One hardly ever notices that she is even there. She says nice things to the doll… combs its hair… tucks her in every night… rocks her to sleep and… in essence, creates a family of her own… vicariously getting her own needs met by becoming a nurturing parent to the doll.

The Lost Child may also lots of stuffed animals on their bed at one time and knows each of them intimately. A negative is that the Lost Child spends so much time in their fantasy world that they lose out on opportunities to make friends in the real world. On the positive side… the Lost Child becomes very creative due to her frequent exercise of fantasy.

The fourth child is usually the Mascot — this is the baby of the family. They get their need met by being on stage. They are the class clown or the cute one – It’s the Mascot’s job is to bring humor and levity to the family… Mascots frequently become comedians and entertainers.

Get All the Books, Audios, and Videos!

Get all of the eBooks, Printed Books, and Online Courses with the Iceberg Bundle

Another function of the Invented Self is to manage the impressions of others who are important to us. I was first exposed to the ideas of Impression Management and External Focus in Ellen Shaaf’s excellent book, Codependence.

Impression Management is driven by the “what-would-other-people-think” syndrome. It goes something like this for the codependent: If I have ten people in my life who are important to me and one of them is mad at me while the other nine think I am the greatest thing in the world, I would focus much of my energy on how I could manage the impressions of that one.

If two or three get upset with me, I get anxious – four or five and I get disparate or panicky – it can almost feel like I’m dying. It feels like I am dying because in a way I am. I draw my identity – my sense of self – from those ten people.

I must be vigilant in managing the impressions of those around me… If they accept me and think I am okay then I must be, right? Not necessarily… even if they accept me I cannot truly accept their acceptance because at another level I feel like a phony.

An example of this is when we have difficulty accepting compliments from others… Somewhere inside the voice of shame is telling us “They wouldn’t say that if they really knew you!” The voice may even be inaudible… but we feel like a phony anyway. This accounts for the paradox of why we tend to discount or minimize anything positive coming from those we try to please.

The survival roles described above are examples of the masks we learn to wear in childhood… As we grow and the pain continues to accumulate, we get more and more sophisticated in the masks we wear. For a fairly complete catalog of masks read John Powell’s book, Why I am afraid to tell you who I am.