Psychological mind games are habitual patterns and methods of structuring time and obtaining Strokes. Games are interpersonal time structuring options sandwiched in between the safer, more superficial option of engaging in Pasttimes and the riskier, more candid option of Authentic Intimacy.

Signs of a Troubled Relationship

Psychological games were first identified and cataloged by Eric Berne M.D., founder of Transactional Analysis in his classic book from the mid-1960’s Games People Play. Berne defined a “Game” as: A patterned and predictable series of transactions which are superficially plausible but actually conceal motivations and lead to a well-defined predictable outcome. 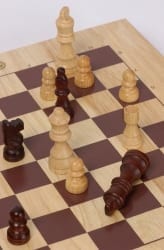 These psychological mind games are habitual [neural networked] programs of behavior that exist in the implicit memory and run subconsciously – beneath the awareness of even the initiator of the game.

In other words, we don’t intentionally engage in these games… In fact, many of us have expressed and/or heard this friendly warning early in a relationship…”I don’t play games”. It’s not a good thing to have a reputation as a “player” or a “tease”. But since healthy intimacy, 24/7, with everyone we know is not possible in our society we have little choice but to engage in various games. (Click on the image below to see a video on the forces that drive us to we create these subconscious programs)

These psychological mind games are not played for fun…They are dysfunctional subconscious programs that have been created by our Little Professor in order to adapt to the dysfunction of our family and obtain strokes — even negative strokes are better than no strokes at all.

The games we play are also, at least partly, the result of the role-modeling of our parents. When we watch them play certain games over and over again we develop the network for that program (Intensity and Repetition). They become part of our Love Map. Many times our parents (subconsciously) even teach us the rules and how to play the games. These teachings are apparent in the Injunctions and Attributions we carry within us throughout life.

Even though many psychological mind games can be harmful, there is always a secondary gain or “payoff” for playing — also known as a positive intention in Parts Integration Therapy. Here is a partial list of possible Payoffs… 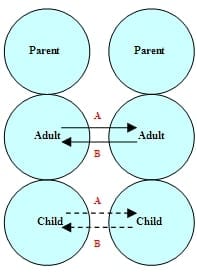 With games, more than two ego states are involved in two complimentary transactions occurring simultaneously…one on a conscious (social) level the other on a subconscious (psychological) level.

On the social level everything appears to be above board, honest Adult-to-Adult communication… but on the psychological level, a subconscious program stored in the implicit memory is sending a hidden message.

The hidden message is the invitation… or “bait”… from a Child Ego State designed to “hook” a perceived limitation in a Parent or Child Ego State of the receiver of the message. 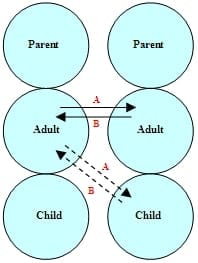 Key Point: “It takes two to tango”… The partner we choose must know how to play the games we play.

Perceived limitations are identified and “cataloged” through subconscious perception in the partner or mate selection process — what I call the subconscious synchronization of compatible neural networks.

So, on a conscious level Person A… the initiator… appears to be sending a socially acceptable message — while on a subconscious level a psychological mind game is being played.

When the receiver — Person B — responds by taking the bait there is a “switch” in ego states by Person A who gets a surprise feeling or experience (the payoff).

Angular transactions are consciously employed by telemarketers, bill collectors, and door-to-door salesman in order to get the sale or collect the money (payoff). This is probably where the phrase… “What’s your angle?” came from. Perhaps the following will illustrate…

Duplex transactions, those involving four ego states, are the psychological mind games that we are concerned with here… They are played by innocent people on a subconscious or mostly subconscious level.

Context: Billy’s mother sat in the living room, talking on the phone with a friend… Suddenly there was a loud crash in the next room… upon entering the room Billy’s mother found the cookie jar had been knocked off the table and onto the floor — Billy was standing next to it. 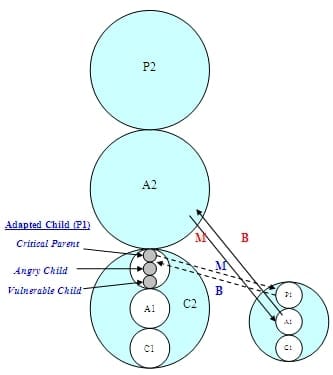 In the above example, mother was playing a Persecutor psychological mind game called “Now I’ve Got You, You SOB!”(M) and Billy was learning a Victim game called “Kick Me”(B).

All Billy had to do was say “I did it” and his mother couldn’t play her game. But the Little Professor goes on instinct since it does not yet have the wisdom of experience… the instinct for self-preservation says “stay out of harm’s way”.

Key Point: The sudden shift in ego states by mother provides intensity which, combined with the repetition of playing the game over and over again, will burn the game instructions into a neural network that Billy will likely carry with him into his adult relationships and mate selection process.

In other words, Billy may subconsciously search out and find a partner who knows how to play “Now I’ve Got You, You SOB!” so he can continue to play the “Kick Me” game. It’s in the courtship phase that the subconscious auditions are done — with the use of subconscious perception.

Psychological mind games fit easily into the framework of the Drama Triangle and always include a Victim, Rescuer, and/or Persecutor. They may be played with mild, moderate or severe intensity.

Check out the common relationship mind games to explore further.