Who is an Addict?

Home » Addiction » Who is an Addict?

Who’s an Addict?? It’s been said that in America if you CAN become an addict — you WILL become an addict — to something. Evidence for this is in the literally hundreds of 12-step organizations with millions of members available today…Eighty years ago there were none at all.

Just for kicks, I did a little unscientific research to produce the following top seven list… it’s consistent with my experience as a therapist. I used search term rankings to identify those related terms most often searched for by users of the internet.

There are many definitions to chose from. My favorite definition is one by Craig Nakken that I modified just a little bit:

I changed the word “pathological” to unhealthy since they mean the same thing and “unhealthy” is not as stigmatizing. I also added the word “primary” because “love and trust” are two ingredients for a primary relationship. All addictions are unhealthy because they follow the same general stages as those of alcoholism. For details of specifics & differences in types of addictions click on the links in the top ten list above.

I use past-tense to signify that once the damage is done — the neural network for addiction created — it matters not if one still loves and trusts their addiction of choice… without help they remain powerless to resist the cravings to use it. Addiction affects us on all levels which is why it’s often referred to as a Bio-Psycho-Emotional-Social condition — Check out Addiction Games to see the psycho-emotional-social influences behind the biological processes outlined below.

Mild negative signals are called dislikes while stronger negative signals are call aversions. If you have read many of the pages on this site you will know that intensity and repetition are the two ways to “burn something into our neurology” creating a new neural network. — Be sure to read Pattern Matching for full details about this important function of the brain. As the network for our addiction of choice grows and expands it connects with other parts of the brain.

It just so happens that an area of the brain we refer to as the “reward pathway” is in the same area as our neural networks for survival… the ventral tegmental area. We are all “wired” a little differently. Some of us are wired so that alcohol is the thing that really “does it for us”… for others its food…others drugs, gambling, shopping, and so forth. What addiction “does for us” is to tickle our reward pathway.

It doesn’t really matter which feather we use, what matters is how intense the tickle feels. That tickle is our “reward”… And who doesn’t like to be tickled? By the way, if our problem is “tickling our self with a feather” does it do any good to switch feathers? Nope, this is called substitution which either leads to cross-addiction — developing an addiction to the new feather — or a return to using of our “feather of choice”.

It’s difficult, but not impossible, to change or “turn off” a neural network when it has become “deeply ingrained” such as a network for an addiction. This is because these deeply ingrained networks have grown over the years into very elaborate and sophisticated networks, sometimes growing into places they shouldn’t.

The nucleus accumbens is also part of our reward pathway. Also in this same area are three basic survival systems — instinctive networks we are born with. They are referred to here as the “Eat”… “Don’t get eaten”… and “Reproduce” Systems. Our internal world is accustomed to a certain biological balance or “steady-state“. When the balance is upset, the appropriate survival system is activated so as to regain that balance, also known as homeostasis.

As an example… Let’s imagine that you are working on an important project… you’re really into it so you skip lunch… Somewhere around 2 p.m., you notice an uncomfortable gnawing feeling in your stomach. However, you’re at a critical place in the project and making good progress so you decide to ignore the hunger. At about 5 p.m. it’s getting hard to concentrate as the hunger grows but you continue on. Sooner or later the hunger gets so strong that you are compelled to stop and satisfy that need.

Once you eat, the hunger goes away and you can again concentrate on your work. The “off switch” is activated because the need is satiated, or satisfied. If you had continued on, the urgency to meet that need would get so strong you would feel so desperate for food that you would eat moldy bread if that is all that was available at the time.

Each of the Survival Systems in the diagram below has their own “triggering mechanism”. When the brain notices a pattern or trigger — such as a threat, an associated object, a reminder or a possible mate — the “trigger mechanism” creates an internal signal to satisfy or “satiate” the associated need.

The diagram below represents how these systems function to maintain the brain’s familiar steady-state or homeostasis. (See The Craving Brain, by Ruden and Byalick for more details)… 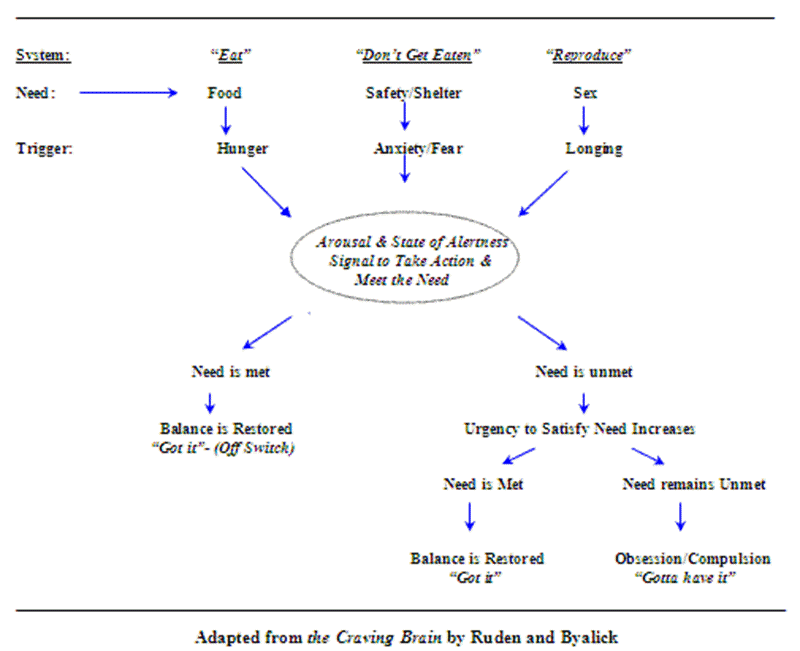 In their book, The Craving Brain, Ruden and Byalick explain that in the normal survival systems — “eat”, “don’t get eaten”, and “reproduce” — some “trigger” causes an increase in the neurochemical dopamine in the nucleus accumbens. This rise in dopamine “turns-on” the hunger, anxiety, or longing which signals that a “need” has been identified… the further increase in dopamine causes a sense of urgency to satisfy the need…so a rise in dopamine is the “on switch”.

Ruden and Byalick go on to explain that when the need is met (satiated) then there is an increase in the neurochemical serotonin… A rise in serotonin levels in the nucleus accumbens is the “off switch” for the hunger, anxiety, or longing – the need disappears. When the need is not met, there is a decrease in serotonin with a continuing rise in dopamine levels in the nucleus accumbens causing the craving to grow stronger until we are compelled to meet the need… there is no “off switch” until the need is satisfied. This is how it is supposed to work.

Just a side note about the role of dopamine as the “on-switch” and the role of serotonin as the “off-switch” in the nucleus accumbens… In the brain-at-large these two neurochemicals are known as neurotransmitters. In this role, they act as “feel good drugs of the brain” being sent from one neuron to another by way of the synapses. However, these two very important chemicals have other roles in the body as well… dopamine, for instance, helps regulate the digestive system. The role of dopamine and serotonin in the nucleus accumbens are as neuro-modulators… in other words, they modulate (i.e. turn-up and turn-down) signals to the survival systems.

So — in the nucleus accumbens, a rise in dopamine is the “on-switch” that signals a need (gotta have it!) and a rise in serotonin is the “off-switch” (ahhhhhh….got it!) once the need is met.

To summarize Ruden and Byalick’s hypothesis… as addiction progresses, the neural network for it gets cross-wired directly into the reward pathway right alongside the normal survival systems of “Eat”, “Don’t Get Eaten”, and “Reproduce”. I refer to the addiction network as the “Feel Better” system because — for an addict — feeling bad triggers a rise in dopamine in the nucleus accumbens signaling a “need” to use and feeling good also triggers a rise in dopamine signaling a need to use.

So, when the addict feels bad they have an urge to feel better, but when they feel good they also have an urge to feel even better — hence, the “Feel Better” System can be triggered by many things including any change in emotions…bad, sad, mad, or glad! Example: A “trigger” can be a feeling or anything else associated with the act of drinking, — e.g., the time of day, the smell of alcohol, the sound made by pulling the tab on canned beverage, a TV ad for alcohol, or seeing the stockpile of alcohol at the local supermarket.

Each of these triggers causes a rise in dopamine — the “on-switch” — signaling it’s time to feel better (aka change my current mental-emotional state). When the “need” to feel better is triggered the brain does a lightning-fast database search for the quickest and most efficient method of satisfying that need – for an alcoholic the urge will be for a drink. Attempts to refrain from drinking… eating chocolate… gambling at this point causes a further rise in dopamine levels AND a decrease in serotonin which creates a craving that becomes so strong it must be satisfied.  Furthermore, there’s a major glitch in the “Feel Better” system — once that person does take a drink of alcohol, a piece of chocolate or wins a bet there is no rise in serotonin… Hence – STILL no “off-switch”…the increasing need causes a loss-of-control.

Key Point: Because the addictive need doesn’t get satisfied… sometimes the alcoholic can’t stop drinking until he passes out or runs out of alcohol… the gambler can’t stop gambling until he is out of money… the food addict can’t stop eating until he can eat no more — resulting in an unpredictable loss-of-control. Initially these episodes of loss-of-control only happen occasionally… but as the network grows and addiction progresses, they become more frequent and closer together.

When the addiction network progresses to the late stage, it can become so sophisticated and so powerful that the person frequently keeps on drinking until they can’t drink anymore because they’re in jail, too sick, or pass out. In the late stages, the same pattern of loss-of-control can be seen with addictions to chocolate chip cookies or banana cream pie… shopping or spending… working until all hours of the night… betting on horses or football games, sexing, fixing, rescuing, and care-taking, etc. etc. etc.

Interesting side-note: Apparently, things that are NOT good for us (excessive use of alcohol, drugs, food, sugar, etc) do not trigger the off-switch… so there is no reward, no “ahhhhhh got it!”. But things that ARE good for us…going to 12-step meetings, talking out our feelings, prayer and meditation, living according to our values DO trigger the off-switch…there is a rise in serotonin with the use of recovery activities.