Neural Networks: The Location of Change

\Home » Subconscious Mind » Neural Networks: The Location of Change
The neural networks of our brain and central nervous system are comparable to but infinitely more sophisticated than the fiber-optic network connecting millions of computers together in a single network that we have come to know as the Internet. 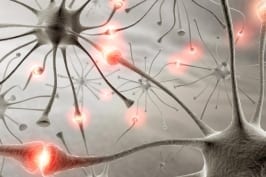 One main difference is that instead of millions of computers — our brain has up to 100 billion“computers” called neurons connected together in a biological network that would put AT&T to shame. And, just like the Internet, our brain has networks… embedded in networks… embedded in networks… and so on. A neural network is a cluster of neurons connected together to form a “database” of encoded information such as thoughts, feelings, beliefs, programmed reactions, emotions, and even physiological data.

If we frequently ruminate about depressive or obsessive thoughts, we are building a neurological database for depression or obsession and can experience everything that goes with it! If we think of each brain cell (neuron) as a computer and a neuron’s dendrites and axons as the fiber-optics, then try to fathom this —

There are up to 100 billion neurons in our brain. Each neuron has up to 100 thousand dendrites making over 100 trillion constantly changing connections. According to John Ratey, MD, author of A Users Guide to the Brain:

“The neuron and its thousands of neighbors send out roots and branches – the axons and dendrites – in all directions, which intertwine to form an interconnected tangle with 100 trillion constantly changing connections…

There are more possible ways to connect the brains neurons than there are atoms in the universe. The connections guide our bodies and behaviors; even as every action we take physically modifies their patterns…

Thanks to sharp imaging technology and some brilliant research, we now have proof that [network] development is a continuous, unending process. Axons and dendrites and their connections can be modified up to a point, strengthened, and perhaps even regrown. – A Users Guide to the Brain, (page 20)

Each network has a function. We have simple networks for daily routines…

And more complex networks for such things as:

Neural networks are why you don’t have to re-learn everything, including the alphabet, every time you want to read a book!

Now take a close look and notice exactly how they are crossed… Got it? Great, now try to cross them in exactly the opposite way. You should notice that the first way is comfortable and automatic…you don’t even have to think about it. The new way is uncomfortable if you are able to do it at all…most people experience a momentary confusion and others freeze up totally and can’t do it. The new, uncomfortable way is new behavior for which you do not yet have a network.

You could create a network for doing it the new way, but it will take a few weeks of discipline and repetition. This is why changing habits and behaviors can be difficult… it is simply easier to do it the way we are programmed to do it.

If you happen to be ambidextrous you may be able to do it comfortably and easily both ways. This simply means you have a neural network for crossing your arms both ways, writing with either hand, etc.

The neural network of our mind is structured in much the same way…though incredibly more complex and sophisticated. Inside this huge neural network are smaller neural nets, or cognitive maps, where clusters of neurons and dendrites are assigned to particular behaviors, memories, beliefs, thought patterns, etc…

Dendrite and axon connections tie all the neurons together to make up the Internet-of-the-Mind. Each neuron has an axon and as many as 100,000 dendrites. Axons are the part of the neuron that packages and, by way of an electrical impulse generated by the neuron, sends chemicals called neurotransmitters out into a gap between an axon and dendrites.

The Gap is known as a synapse (See Image Below). Dendrites are responsible for receiving the electrochemical signals and sending them down the line into the cell body of the neuron they are attached to. These neurotransmitters, or neurochemicals, contain bits of data (hear-see-feel-taste-smell data). Dendrites receive the data (learning) and the axon sends the data (teaching).

We began creating and growing dendrite connections the moment we were conceived… Later on, we create networks for sitting up, walking, talking, reading, and so on. A network contains explicit and implicit data for all the skills, knowledge, emotions, beliefs, physiology, motor skills, thoughts, memories and experiences that have to do with that function or behavior. We have networks for identity and self-esteem… We have networks for how to drive a car, how to swim, how to be a good spouse, how to do our job. We weren’t born with these networks…we had to create and grow them.

For example… do you remember learning to drive a car? Remember how nerve-wracking that was? All those things you had to learn, think about, and remember to do – all at the same time! The rules of the road…when to hit the brake…dad teaching you to parallel park…starting and stopping on a hill with a clutch…taking your drivers test…flunking the test!

Most of us were definitely not born with a driving network installed. But now most of us can do those things in our sleep…how often do you drive from point A to point B and not remember the trip? Yep, we have become ‘one with the vehicle’… In others words, driving has become automatic because we have developed a very sophisticated driving neural network. (My wife would disagree in my case)

We also have limiting or unhealthy neural networks devoted to addictions, self-sabotage, phobias, anxieties, depression, and other unwanted feelings and behaviors. But the good news is that the subconscious mind uses a process known as synaptic pruning to rewire these unhelpful neural networks!

Networks you want to re-wire or new ones you’d like to create, such as one for regular exercise, will take several weeks of consciously directing your attention toward it. With concentration, dedication, and discipline it only takes several weeks of effort to feel like the new behavior is becoming part of you or “second nature” – Continuing the behavior becomes easier and easier.

When this happens the new behavior has dropped beneath the surface of your awareness and is taken over by your subconscious mind – it becomes an automatic program otherwise known as implicit memory network.

Remember the two ways to ‘burn a network into your neurology’ is through intensity and repetition. If you want to improve at playing the piano what do you have to do? That’s right – practice, practice, and then practice some more… Eric Clapton started playing the guitar early in his childhood. Some of us believe he has become ‘one with the guitar’.

In most cases, it is not that difficult to re-wire an existing network or create a new one. In fact, new networks are frequently being created automatically on a regular basis – the result of new learnings and significantly intense experiences. For example, on a special day in your life… Perhaps the day of your wedding or the birth of a child… the intensity of that experience imprinted the sights, sounds, smells and feelings of it into your brain – “burning it into your neurology”.

Twenty years later all you have to do is think of it, have an anniversary, hear a song or look through a photo album and all that comes back to you.