Fear of Abandonment & the Inner Child

Home » The Iceberg Model » Fear of Abandonment & the Inner Child

Fear of abandonment is almost always a direct result of feeling or being abandoned at some point in childhood. This real or perceived abandonment is traumatic to children causing fragmentations of the Self. The study of Ego States through TA and Structural Analysis led to what has widely become known as Inner Child Work. Dr. Charles Whitfield was the original pioneer who led the way with his Book, “Healing the Child Within”.

Many more therapists, including John Bradshaw, have contributed greatly to the evolution of Inner Child Therapies. The “Inner Child” or “Inner Children” are metaphors for the neural networks that store the essence of the child who suffered emotional trauma and fear of abandonment.

The Critical Parent ES contains all the critical parental messages given to the child. The younger a child is the more receptive they are to these messages…referred to as Injunctions in TA language. Many of these injunctions are rooted in the fear of abandonment. This Inner Critic frequently has a positive intention of protecting the self from abandonment through shamming and critical self-talk.

The Angry/Defiant Child is the neural network for the eight to twelve-year-old part of us that contains all the thoughts, feelings, attitudes and coping style of that time in our lives.

The Vulnerable Child is the ES of the one to a seven-year-old part of us that carries all the woundedness, trauma and fear of abandonment from our childhood.

This is the part of us that Bradshaw and Whitfield speak of that has “gone into hiding” deep inside. In other words, it has been repressed or “disowned” by the subconscious mind in order to protect us from the pain and fear of abandonment it carries.

The main problem with repressed and disowned parts of self is that they don’t stay repressed…they get triggered just like any other part of self. When they do is when we have “reactions” that are grounded in fear of abandonment. When we are “triggered” by these survival-oriented ego-states, we typocally find ourselves in some variation of the Drama Triangle...

Introduction to the Drama Triangle

TA and the Drama Triangle 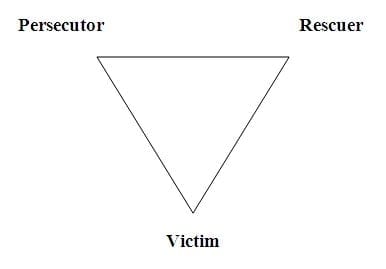 The Victim: This player gets their needs met by having other people take care of them. They tend to blame others for what’s wrong in their lives and play the “why don’t you, yes but” game or the “I can’t do that, because” game.

The Rescuer: Due to an underlying fear of abandonment, the Rescuer needs to be needed and so they attach themselves to a Victim… Rescuers frequently notice that others always come to them with their problems and don’t know why they do that.

The Rescuer subconsciously helps keep the Victim dependent on them by playing into their Victimhood – doing everything for that person rather than allowing them to experience that they can do it for themselves.

The Persecutor: Stuck in First Position this player is “all-about-me” and externalizes their contempt through shameless and blameless behavior.