Codependency in relationships is usually rooted in children of alcoholic or other addictive parents. They typically experience moderate-to-severe relationship problems due to their family dynamics. In fact, there are a couple of well known 12-step groups just for them — Codependents Anonymous and Adult Children of Alcoholics.

The Drama Triangle and Addictive Families

If you have not already done so…Click here to learn about the Drama Triangle in order to fully understand the ideas presented on this page. 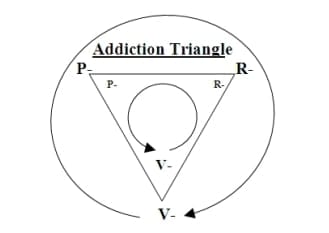 The addicted individual — whether addicted to drugs, alcohol, gambling, rage, food, sex, work, drama, or whatever — goes through a predictable cycle commonly referred to as the addiction cycle. The above diagram shows how that cycle fits on the Drama Triangle.

If you will notice, there is a counter-clockwise cycle in the inner world of the person and an opposite, clockwise rotation in their outer world as represented by the arrows.

Below is an example of the Inner-Cycle of experience for the addicted person:

You may notice the outer-cycle of public behavior rotates in the opposite direction of the inner-cycle of self-talk — from Victim to Persecutor to Rescuer and back to Victim again.

Below is an example of the Outer-Cycle of experience for the addicted person: 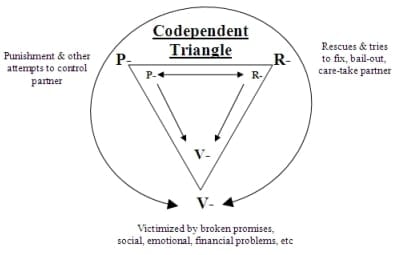 The Codependent Triangle is essentially a map of a very chaotic lifestyle. Outwardly, codependency in relationships is about others trying unsuccessfully to stop or control the addictive behavior of their friend or family member. Their outer-world of behavior can rotate in either direction or even vacillate rapidly back and forth in either direction.

While on the inside they flip back and forth between inner-Persecutor… by blaming and guilting themselves for not being able to stop or get through to their loved one…to inner Rescuer by making excuses why it is impossible to get off the merry-go-round by protecting & take better care of themselves.

Both the inner Persecutor and inner Rescuer end up heaping tons of guilt and shame on the inner Victim to the extent that it has a different name here — the inner Martyr — because of the daily sacrifices and losses incurred as a result of their codependency in relationships.