Looking for some quick and easy tips on the stages of learning something new? We all know these stages because one cannot help but go through them everytime new learning takes place. Still, it would be helpful to review them so we can make good decisions about how much we are willing to invest in a new learning opportunity. The following is adapted from excerpts of Chapters 7 and 8 of my book Thaw – Freedom from Frozen Feelings

Four Stages of Learning Something New 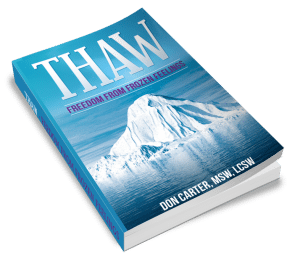 With concentration, dedication, and discipline, it only takes several weeks of effort to feel like a new behavior is becoming part of you or “second nature.” Then, practicing that behavior over and over (repetition), it becomes easier and easier.

Seeing the improvement in competence and skill, or “getting good” at the new behavior, can add intensity to the experience. And with enough repetition, soon it becomes automatic. When this happens, the new behavior has dropped beneath the surface of awareness and is taken over by the subconscious mind; i.e., it becomes an automatic program otherwise known as an implicit memory network.

Remember the two ways to “burn a network into your neurology” is through intensity and repetition. If you want to improve at playing the piano what do you have to do? That’s right -— practice, practice, and then practice some more. Eric Clapton started playing the guitar early in his childhood. Some of us believe he has become “one with the guitar.”

Learning as it relates to self-preservation, such as the survival skills and developmental tasks of childhood, is accomplished at the subconscious level. The learning process for information related to self-actualization (growth) requires conscious effort and self-discipline. This learning process can be boiled down to transforming explicit memory into implicit memory (growing a neural network). There are four stages one must go through in learning a new behavior or routine:

Conscious effort and these four stages of learning are what we have to rely on to gain access and “thaw out” the frozen feeling-states of childhood abandonment, shame, and contempt. Therein lies our challenge! By now, the reader is aware that there is a significant difference between the storage and handling of data concerning self-preservation and information concerning self-actualization –- data regarding survival is stored on protected networks of the mind, while growth-oriented data are stored on open, accessible networks, which are constantly being updated.

One must apply conscious effort and daily disciplines, proceeding through the above stages of learning for self-actualization, in order to re-wire survival strategies that have been subconsciously encoded and protected on neural networks of self-preservation. (Don’t worry, it’s a lot easier than it sounds, but it will require a new way of life.)

Fortunately, this does not mean we must get rid of the old programming such as fear of abandonment, obsessions and compulsions, toxic shame, toxic relationship patterns (i.e Drama Triangles, Punishment and Forgiveness cycle, Distance and Pursuit, Enabling, and Mind Games) etc –- deleting this information regarding self-preservation is not the goal, and is probably impossible without surgery anyway. (Hey, it’s possible! they actually tried surgically altering the brain for a while. The procedure was called a lobotomy.)

But our task is somewhat less invasive. It will involve creating new alternatives on self-actualizing (i.e., growth-oriented) neural networks that will fill in the developmental gaps of unmet childhood dependency needs and initiate an ongoing healing process for the frozen feeling-states of abandonment, shame, and contempt. In order to do this, we must develop the means and technology to communicate directly with our neurology.

Feeling-states, ego-states, and neural networks are synonymous terms used in describing how systems of beliefs, feelings, instructions, coping skills, and behaviors become automatic “programs” that are stored in the implicit memory of the subconscious mind-activated by the brain on cue. As indicated in the last chapter, one must have a method of communicating with and about their neurology in order to effect changes in the neural circuitry of the brain.

Therapeutic constructs such as the ideas of parts, ego-states, feeling-states and so forth provide the technology suitable to that end. For our purposes here I will borrow the ego-state maps from the field of Transactional Analysis (TA), more specifically, a branch of TA known as Structural Analysis.